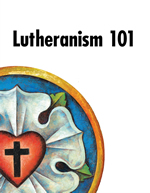 Who are these Lutherans?

A Lutheran is a follower of Jesus Christ.

Who was Martin Luther?

Lutheranism had its beginnings in 1517 when Martin Luther, a German teacher and priest, publicly called for the correction of errors in the medieval church. Luther was also a professor, author, composer of hymns and reformer.

Lutheran teachings are centered in the Scriptures.

• The Bible is the Word of God.

• God is one in three persons -Father, Son and Holy Spirit. We call this the “Holy Trinity”.

• People were created by God in perfection, but failed. We cannot, by our own effort, return to God.

• Our Savior, Jesus, died to save us all.

• A person is justified (made right with God), not through our own efforts, but only by God’s grace, through faith.

• The Church is all people who believe in Jesus as Lord and Savior.

• Baptism is by water and the Word of God. It is a sacrament creating new life in a person.
It remakes him or her in a God pleasing way. Lutherans baptize people at all ages.

• The creeds are statements of belief. They summarize the Bible’s teachings. They have been believed by God’s Church since Jesus established the Church.

• A Christian’s unity with fellow Christians is rooted in Christ as God and Savior.